Well, a little context to better understand what ‘‘Bluelien’’ stands for:
His health is equal to or greater than that Heavo 2.0 (a 7-key phobie) his damage is fine, bypasser, dimensional and hits by meleé. as such it is a 5-key Molley Bully. The problem is that he has the ability, which is to create healing “Spas”, for a healer that makes him a beast; nor does Leshy have such potential when it comes to combat.

It can generate healing pools that heal twice (your turn and the opponent’s), its cooldown is only 1, so every 2 turns can have 2 simultaneous spas, so 2 phobies can perfectly recover slowly, but when a spa disappears, Bluelien only replaces it instantly; It also does not have the black padlock, so from the same turn that you summon that phobie you can start healing.

You can put spas at a distance; So by itself it is already a phobie that is worth 7 keys, now at level 1 you can see that it cures +200, the same as a spa in low leagues; Each level raises +6 its healing factor so having it early is already having a lot of advantage; a healing pool in SOAF cures 235 being as much as possible that a map can cure, but Bluelien at level 6 already exceeds that healing with 236. Apart from being a Spa, if a phobie stays in it for a turn, when turning around it heals double (400 at level 1) but its pools last 4 turns, so a phobie like Blast-0 Matic if it was close to dying in those 4 turns recovers a total of +1,200 of health!

As for the player Hopeloy, people complain that he uses it too much, and rightly so; he´s Bluelien already cures for around 306 each spa, so its healing potential is 612 per turn, if a phobie stays there for 4 turns it recovers the total of +2,484 passively; this combined with its high-level phobies make it a rival too difficult to defeat, especially on large maps where you can summoning Bluelien without problems or prepare a strategy in advance due to its economical cost of 5 keys along with its Bypasser mobility.

What I would recommend to level such a phobie would be to give it an ‘‘Abrupt nerf’’ to rebalance him:
-Subtract health from 1,800 to 1,500 (if or if in conjunction with any of the following)
-increase he´s cooldown by 1 and add the black padlock so that it heals every 3 turns as a Clinico and can not be spamming heal pools
-Lock cure to 200 (that does not increase in relation to Bluelien´s level) and that only rises based on the league in which the player is (if you are in high leagues cure more to a maximum of 235)
-Reduce the duration of your spas to 1-2 turns so you don’t have more than 1 in the field
I consider that they are the fairest options to balance this phobie that in the wrong hands ends in an abusive mechanic that is over even the stress and skill level of any player. 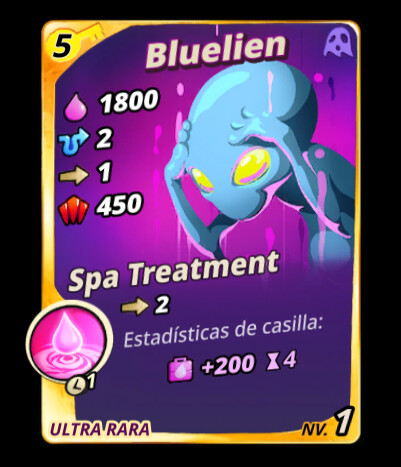 I’m going back and forth on this one. It’s a much better package than all the other healers for sure, but then again none of those are anywhere near overpowered, so there’s room for sth like Bluelien if the devs really want to emphasize strong healers as sth players have to account for.

The question is “Should they?” I personally don’t like it too much, since it makes the game more forgiving for players taking unnecessary damage due to suboptimal positioning. And yes that leads to p2w players having even more of an edge, though I think it’s quite unnecessary to single out any one of them on these forums as the OP does. But either of these arguments is more of a personal preference. In terms of raw power level, i think bluelien is in a spot where it barely doesn’t need a nerf, or if it does then so does Quagmire.

Idk about you but clinico and muffintop are a rank below bluelien when it comes to healing and cost. The rest are overpriced for what they can do.

Op,
But ask yourself, will you really be using bluelien every match? I have it and I don’t have enough keys to summon it because I prioritize ranged damages to kill off the enemy’s tank/nuke.

Thanks for sharing your feedback! I’ll add this in my feedback report that I share with the dev team so that they can look into this.