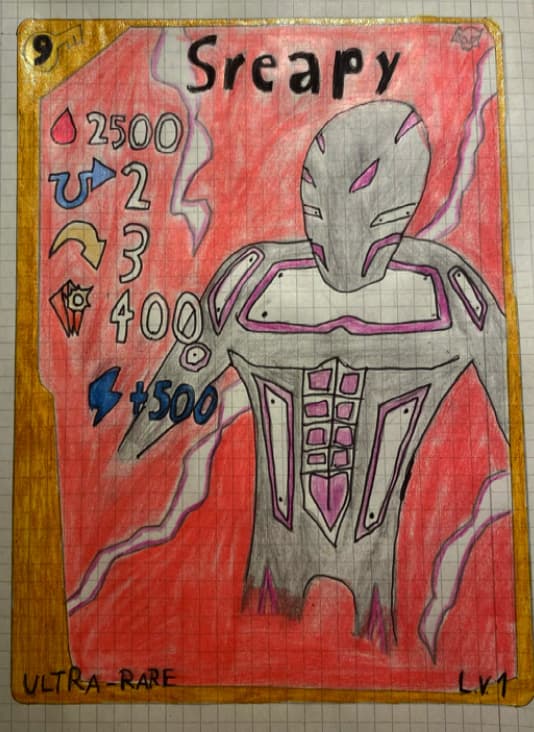 This is my selfmade Phobie named „Sreapy“. He is a 9-key Ultra-rare Phobie with a special attack (not on picture)

Secondly his Gameplay: Sreapy gets struck by a purple lighting and spawns with one at another tile, that’s how he moves, he attacks with purple lightings too so he reaches his fist in the air and a lightning strikes on a Phobie he attacked on, this lighting will cause Phobies around the attacked one to get damaged too (like Klepto)

This is his look: the purple parts on his body are like electrical energy flowing through him , the grey parts are some kind of lightweight armor and the white parts with the screws on each end are heavy armor parts.

Now his Special Ability: If Sreapy‘s HP gets under 1000, he can unleash his ability called „Ultimate Sacrifice), he hovers in the air and explodes with a Semicircle of purple lighting across the whole map, this attack will give allied Phobies +500HP and damages enemy Phobies 1400HP. Sreapy dies with this attack and cannot be used anymore in this match

I really hope you all like this idea and maybe he does too much damage but I don’t think that he will be added anyways because he’s too strong with his range and ability, but that’s why he’s 9 keys so you gotta wait some time to even get him on the field

I would love to get feedback from everyone who read this and I’m asking the developers to rate this Phobie too and if they would consider adding him to the game, that would make me so happy

Thanks for showing interest in my Phobie !

Edit: This Phobie is way too Overpowered so the stats should be 320damage and 400 electrical damage. He already has an 3 tile range so I don’t think it would be fair in any way for him to get these stats. So if you have any suggestions for him, please write them down

It looks like an evolution of the Grey alien.

Too op, 3 range lob 2 moley movement with decent dmg and aoe is already busted on its own. Everything else is beyond overkill.

Im guessing the main point of this phobie is the ability gimmick which is OP on literally anything no matter how bad the stats are so i suggest you rework that.

Thanks for the feedback, like you said his main part should be his special ability because it’s not even fair, so here would be the final stats:

If anyone has more suggestions please write them down!

I don’t know why I’m replying to this so late but why not. It is a great idea and I really like the artwork. But it is op, one of the people who replied to this topic explained it but just saying, compare your phobie to chuck, another 9 key 3 range lobber. If you are a 3 range lobber with 400 aoe damage plus 2 movement, that’s really op. I think chuck only beat this in health.

But don’t let this bring you down, still keep on making new phobies, I like to see new phobie ideas and the community does too. And, well for me at least, the art and the new concept (the sacrifice) is the most important. We have never seen a super big sacrifice ability. Boom, kerb loom and kabooms abilities hurt, but don’t change a lot unlike yours.

Uh…, Heavo only have 2 throw range, I think you should correct it. And you should go to look Heavily 3.0 and chunk(chunk doesn’t have have AOE, less health and 1 move ). They are super strong Ultra rare, but your phobies is much stronger than them.