Phobies levels are absolutely crucial to the development of the matches, and so is the variety of Phobies you hold. So it’s quite irritating to play against someone with a level significately higher than yours, giving them the adventage to have more Phobies to chose from against you which tend to be up to 7 levels above yours.

The matchmaking it’s all over the place, not only puts you against players with levels completely disproportionate than yours, it also does the same for rankings; it’s not rare at all to face someone with either 500 rank points less or more than you… even up to 1000!. It’s completely unfair for everyone, because it isn’t just me facing players 30+ levels higher than me, I’ve come across players with levels significately lower than mine as well.

While I don’t think the rank really makes a notable difference (most of the time) the levels definitely do, so:

PLEASE, have in consideration the level of players in the matchmaking, our levels are a direct indicator of our Phobies’ powers and the amount of them we hold, it’s not pleasant to play such unbalanced matches and not even get a reward for being the underdog if you so happen to somehow clutch a win.

Here’s examples of a few of my past matches in which this issue took place from both perspectives: 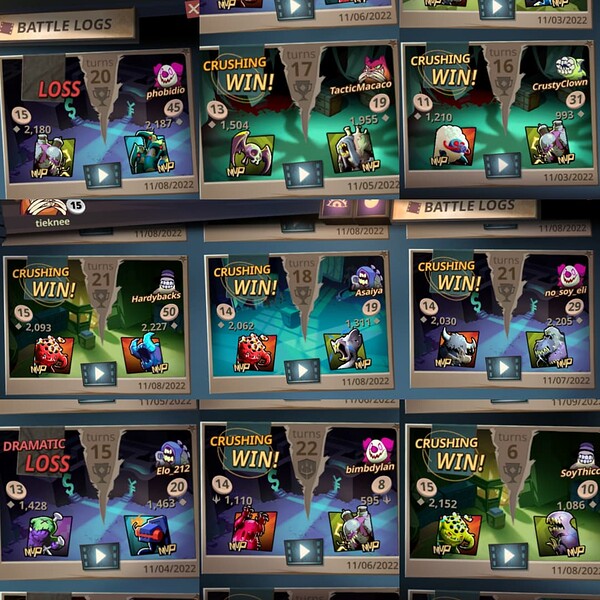 It’s already hard enough to win against the talented players this game has, let alone someone with a massive adventage against you, please look into it.

As a Lv. 38 player I feel you tieknee, but sadly I think the matchmaking system is correct. In my case Lv. 31-32 was a true test of dedication, because the difficulty curve crushed the roof. (I was around SUM1) I always play against players between Lv. 40-80, yet without Snowball so say good bye to some tempo and long range 500+ DAM pin. (You will feel this pain too my friend, but first you have to overcome the everybody has Miss Moffat while you don’t period) I played against them because our ranks were most of the time close. I even had my first match against Blobotomy (Lv. 101) recently, it was an honor to be crushed gently. XD

In my opinion that’s it, you climb slowly to the top (I’m trying to hold SUM2 in my 2nd season), but when you reach the point where you are not strong enough, you have to farm for more phobies and exp. to evolve. For me the pressure dropped a little, when my phobies reached Lv. 7-8 (Lv. 35), but still you have to make every move count and stay strong, because you will face some walls.

As a recommendation I would suggest too an implementation of another matchmaking condition besides rank. Like the oponent shouldn’t be 20-30 Lv. higher than you, and 10 Lv. lower. Something like that. I think this would decrease the number of leaving players around Lv. 30.

Gonna have to agree with @N7_Wesker on this one. I just hit level 36 and am holding down doomsday 2 at the moment. It is hard though. You just got to stick with it. I recommend upgrading you most used low cost phobies as quickly as possible (murder wing, jar cannon, k9000, ect…) You can also be more aggressive at the beginning to give to you map control and you can set a trap or bleed their heart. These have worked well for me when playing players at level 50+ when I was in the 20s.

They are considering doing a mode where all phobies are level 1. I think that will work well as far as balancing things. That’s possibly down the line. In the mean time, enjoy getting new phobies and learning how to best use the ones you have. Sometimes a phobie that most people don’t like, you find you like using a lot.

I agree with @tieknee. Average overall deck level should be considered if it isn’t already.

Rank level is obviously considered and pretty solidly related to deck level, understanding that you could shoot up the ranks only to be pushed back down once you hit that w/e deck ceiling in w/e league.

Whether or not the deck level and the player level have correlation doesn’t apply. If they do, it’s a wash and changes to MM won’t matter, but if they don’t correlate then you’d see an improvement to overall player morale.

Thanks for all of your insights @N7_Wesker @stabberjabber! If I get to reach those levels someday I’ll definitely have your advise duly noted.

However, I’m going to have to disagree with the matchmaking being correct. There’s absolutely no place for unfair disadvantages on strategy games, it simply goes against it’s on definition. The only ‘adventage’ you should have it’s your ability to strategize and to properly manage your deck.

Frankly, constantly beating or giving good matches to such high(er) level players is a big motivational boost for me, but when I see someone deploying their level 2/4 Phobies just throws me off, I’ts unfair and I don’t like winning against them. I feel like this issue truly hurts the newer playerbase of the game. Not everyone is willing to face the ‘tests of dedication’ the game puts you through, not while knowing you could do better battling fairly against folks on your own level, where true strategy comes into place, that’s where the fun is!

To even extend this issue on Phobies, the current ability to PAY your way up to the highest leveled Phobies as well as packs containing better and more powerful ones… just… makes things even worse. I can live in a world where P2W players exist, it’s really just the way things are, but to not only have to deal with players paying to improve their deck but to also deal with a totally unfair matchmaker?! Insane, truly. I have no idea how I’m holding 69% win rate after almost 100 Async matches.

I like your suggestion, Wesker! there definitely should a limit in levels a player can face against each other. But MUST be gradual and considered. A lvl. 50 player can hold a decent match against a lvl 80 one, but a lvl. 10 player has all odds to lose against a lvl. 40 one. So is not just as easy as to just put a definitive number as a limit.

Here’s my latest matches, just ONE! was fair. You can also see the type of Phobies I have to fight against in almost every match while only having ONE level 6 Phobie myself… Razor Mouth… 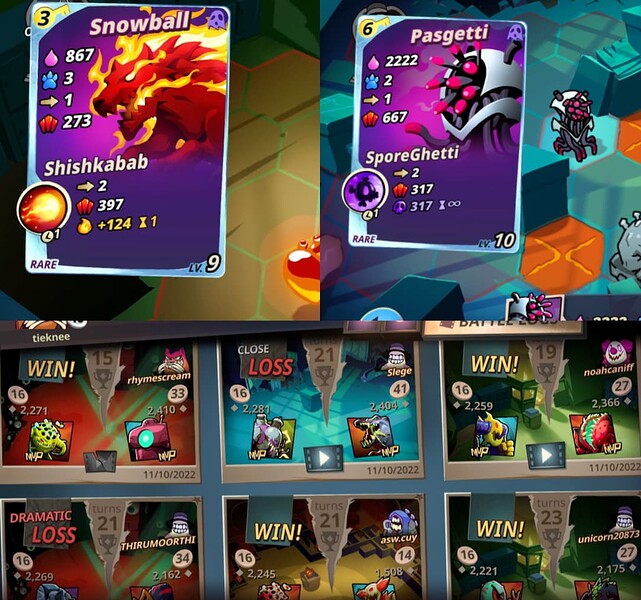 I guess to end my point, I simply want more fair matches for everyone. I know the devs are more than likely prioritizing quick pairing, which is just wrong in my opinion. I wouldn’t mind waiting a bit more for my matches if that means I’ll face someone within my realm of power, not someone months deep into the game or someone who just barely started.