Hi there! Over the last couple of weekends I’ve been making a bit of a tier list + a small guide for the game.
I know that most people probably won’t read the entire thing, but the tier list part should at least be good for choosing which units to focus resources on for anyone in doubt about that.
The actual guide part isn’t that broad (it’s probably like 7 pages in total) so most of the document is just the tier list.
I will apologize for any grammatical errors in advance since it’s just something that I typed out on my second monitor while doing other stuff (and English also isn’t my first language)
Link: @ttps://docs.google.com/document/d/1-Jnh1qayPe7JIxtFvTd4bSfuU-2rAmeeqUSaYbfzWkU/edit (replace the @ with a ‘h’)

Feel free to share your thoughts about anything you disagree with in here since I’m not a perfect player by any means and may be under/over rating certain things.

Looove the effort you put into the tier list!

This is probably the best guide i have ever seen. What’s important is that you have a separate ranking for Small maps and Big maps.
I was quite surprised for some people to put 9 cost keys as S tier on other tier lists… I guess those ppl haven’t considered that 9 cost keys could be a liability playing on small maps.
WELL DONE MAN IN YELLOW!
Btw, if some Nerfs do come around (E.g. Beauty), please do update this list!

I very much plan on updating it if they begin buffing/nerfing any of the phobies in the game.
I will also be updating it once the upcoming ‘Full Disclosure’ update has been out for a while (which I’m rather excited for).

This is a really good guide, good work.

However, I think I would have to disagree with Charon and Honey Bear. Though I used to think Honey Bear was worthless, recently I’ve been winning a lot of games with him. And because of how you can win with Honey Bear, the best counter for it is Leprechaun, which should also not be so low in the tier chart because of that.

I might have underrated Honey Bear, its ability is pretty decent and it has a lot of health (the attack power is still rather low though). - Might consider raising it a bit when I update the tier list (post the ‘Full Disclosure’ update).
Charon I personally don’t think is very good (just haven’t seen it be good when played against me, and its stats feel underwhelming).
Furkin Leepricarn just loses too much health compared to other units at the same cost IMO (even though it’s ability is actually pretty powerful).

Very much liking this effort, there’s tons of insight for new(ish) players in here.

I don’t want to be so tedious as to talk about why i think a phobie should be rated a tier below or above, but the few things that felt off to me I’ll mention:

Scritch vs Gonzo: Gonzo is the better one of the 2 because these attack buffs are primarily defensive. You want them on a phobie that can attack twice (meaning your opponent must’ve already placed sth in range) and for that purpose Gonzo’s lack of mobility isn’t much of a detriment if it’s placed well. With 1 move + 2 tile ability range it still has a very decent reach, so you’d really rather take the 2 extra keys. Even for offensive uses, it’s not that hard to place Gonzo within 3 tiles of a phobie you want to (threaten to) make a massive aoe attack next turn.

Paddles: It’s pretty bad right now, to the point where you like, feel pity for the player busting him out. The ability is nice, nothing more, but Paddles’ stats are so low you’re basically playing the match with 4 keys down in exchange for some limited extra mobility (2 turns cooldown to boot, jesus fc).

Brony and Heartbreaker: Don’t disagree with their general assessments, but it’s weird to distinguish between usefulness on large and small maps here. That’s not what matters since they’re all about the terrain, i.e. pits, obstacles and lines of sight. If they tend to be played more on big maps, that’s only because it’s generally hard to find an opportunity on the small ones to save up 7+ keys.

1-key units: Imo these should only be rated amongst themselves since they often serve a completely different purpose than the rest of your line-up. You want them to recapture panic points, ideally while getting a free attack in and being able to take more than 1 hit to be removed (which is why awol is the worst of the bunch in many situations).

Spud and Heavo: Rock solid mobility and harassment units imo, esp. on maps with lots of obstacles to cover behind. Esp. Heavo is easily B, not D.

Barzilla: You compare it to Boss, an A-tier phobie, and put it in D-tier because it has 1/3 more health with almost the same damage output, but no ability (dimensional tag doesn’t count as a general pro or con imo). I’m not saying it’s on par with Boss, 'cause that ability is indeed amazing, but Barzilla still has a lot to offer: Ranged, almost-Doughzer amount of hp without being so damn slow, hits quite hard with extra damage if they elect to hit back twice and stay in the fire. That’s more than enough to place it in B-tier imo. It’s the only common high-cost unit too, so suggesting that it’s a rather bad investment potentially misleads new players who only have this one.

Honey Bear: Like Seb said, def. not an E-tier. On some maps it can conveniently shut down both a panic point and a healing pool for 2 turns, which translates to like (up to) 4x235 extra heart damage and (up to) 4x235 damage an opposing phobie couldn’t heal (not to mention denying the free poison counter).

Maggie: I regularly find this one useful. It hits decently hard and that can help a lot when you want to set up a counterattack against certain tiles, but need to occupy a pit or obstacle in order to do so. More like a C for me.

BOOM: Of the 3 suicide bombs, this one is easily the best, because these unit are deterrents. You place them in the back of your formation (be mindful of aoe though) to prevent a potentionally devastating attack on a more valuable phobie where your opponent can only do it from tiles that are close to each other. They’re not about “reaching your opponent” in that sense, more about “not letting them get to phobie x without a significant price to pay”. It’s just that once you successfully deterred, the 2- and the 3-cost phobies are kinda useless for the reasons you mention whereas the 1-key can just be traded in for a panic point. You won’t feel stuck with it.

Lastly, I’d mention somewhere in the strategy section on win conditions how crucial taking and defending panic points is for all playstyles, not even necessarily to be aggressive, but because if you hold an advantage long enough, it eventually forces your opponent into bad trades.

(which is why awol is the worst of the bunch in many situations).

What i like about Awol is that people tend to ignore it due to being 1 key, but he does the same damage as a 3-key, or they don’t ignore it because of the damage, and I can use to bait away from something else. To me he is a lot the same as the 1 key bomb, and I’ve used him often to kill the 2 key ghost guy (forgot name)

Lastly, I’d mention somewhere in the strategy section on win conditions how crucial taking and defending panic points is for all playstyles, not even necessarily to be aggressive, but because if you hold an advantage long enough, it eventually forces your opponent into bad trades.

This, very much this! The reason why I changed my mind with Honey bear and charon is really because of the panic point advantage they can give me. Many units are really map specific on how they can give you an advantage. It’s really important to not always compare units, 1 vs 1, as if they are always on the same playing field.

I think an issue here too, is that some units are easier to learn how to make them useful in specific situations, while others are really not so obvious (e.g everyone knows that a pulling unit works well around pits, but honey bear’s potential was not obvious at first). Give it a few more months and some new player will figure out how to auto-win with some even more obscure tactic.

I decided that instead of doing another full write-up I would just post the tier list with some notes on what I changed and why (since the other way would take a lot of time, and not enough stuff has changed to warrant it)
The units that haven’t been added to their tier list maker yet looks a bit weird btw since I just threw in square pictures of them. 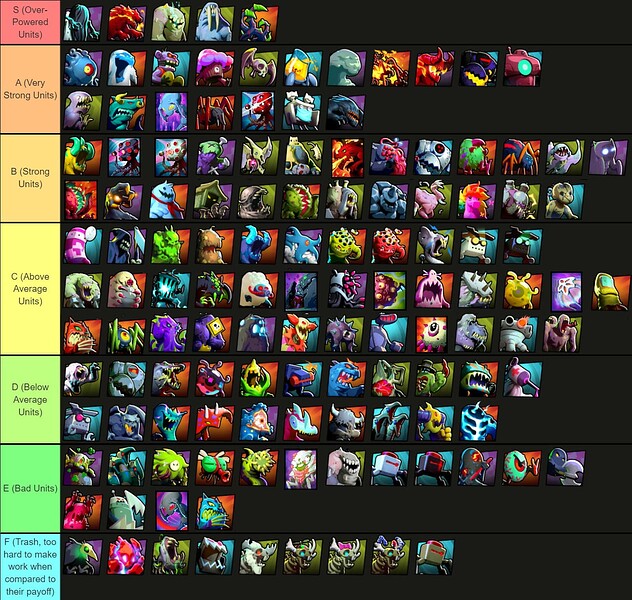 That’s a very accurate Tier List, and I mostly agree on all you say.

In the Tier List: I’m still amazed that you put Finnigan so high, since I’m not seeing him that much, but I like the idea of him as a small cost utility unit in some maps.

What I noticed while playing for several months is that some units can be better or worse depending on the playing skills of your opponent, and if you’re playing arena or classical. In arena and against bad to slightly above average players, units that force your opponent to calculate are stronger, since there’s a lot of chances that an error finally occurs and will snowball. I’d almost never play a Spud in Arena, since it’s so vanilla that it wil not elevate the error chances. But against very good players in classical, if you only wait for an error without a more structured plan, you’ll lose, so it’s a different context to evaluate the phobies.

7 pages? i see 50 XD apart i add information about sasquatch in the phorum, probably that help you.

Hey, good tier list! Really appreciate all the time and effort you put into this. This helped me a lot when I started out, used it pretty regularly whilst climbing the ranks and am now i’m usually sitting in the top 50s on the leaderboards, not to toot my horn so much as to reiterate the good job you’re doing. This really helped me to understand why something was strong/weak and how to effectively use them as none of the other tier lists I could find had a comprehensive breakdown of each Phobie. Keep up the good work!