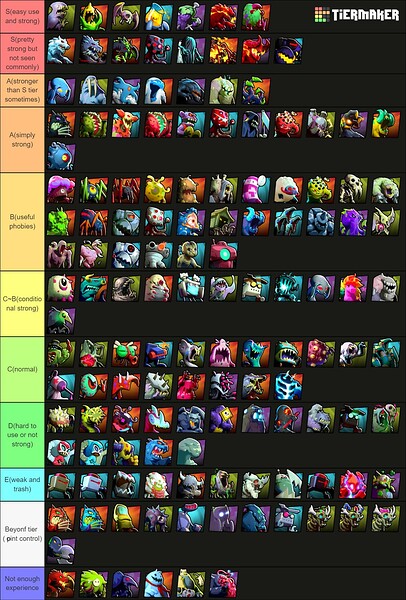 The list may not only according to how strong they are, but also consider their usage rate( just from my experience and, of course, high keys phobies may less use) and whether they are easy to use.

Not enough experience just means I only met them 2 or 3 times or even no. Actually most of them are strong, while I don’t know the degree how strong they are. (except for Leshy, I heard of that it is weak.)

Reasonable opinions to take a while in the game, but one or another clown could get away with that the list is wrong in X thing, this and that bal blah blah, eventually some of your opinions will change regarding certain phobies such as Akira, in gameplays it looks cool and for top players it is good to decimate the rival.

Pretty good list in my opinion - Some things I disagree with (I’d certainly put Muffintop up a bit and Gonzo Bonzo is S tier for sure IMO - Second best unit in the game if you ask me (behind snowball)) but none of the ratings are completely off.

Haven’t really seen enough of Werewolf to judge if it’s really that good to be honest - The few times I have seen it they were either under-leveled or were not used that well though, so may just be that I need to face off against someone who’s used to bringing it.

I don’t have Gonzo Bozo, so I think you may be correct. On the other hand, I had werewolf so I can tell you how strong it is.

The most drawbacks is he will need to take turn to rest for every 2 turn. But it is still worthy for the incredible strong ability with only 4 keys.

Do you ever have trouble weaving in and out of combat with him?
I feel like his beefy form would sometimes have a hard time actually getting to the enemies with all of the tanky turrets and 3-range stuff running around basically every game - but maybe I’m wrong about that?

Then again it might not even be that bad if your opponent focuses his down as long as you’re going in with other phobies at the same time since he’s so tanky.

He definitely sounds interesting though, just a shame that he’s a bit of a rare sight since he’s not that easy to aqquire.